The Keeper of the Keys 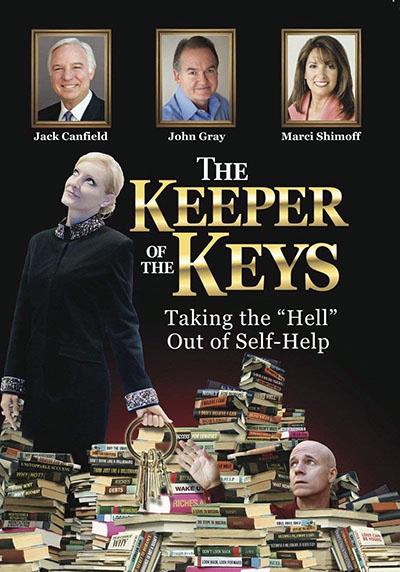 “The Keeper of the Keys” has earned a reputation for being the first funny self-help movie. The film’s goal is to empower viewers by “Taking the ‘Hell’ Out of Self-help.”

The film stars Jack Canfield, co-creator of the “Chicken Soup for the Soul” franchise and author of “The Success Principles,” Dr. John Gray, PhD., author of “Men are from Mars, Women are from Venus,” and Marci Shimoff, author of “Happy for No Reason,” “Love for No Reason,” and “Chicken Soup for the Woman’s Soul.” The movie also features 15 experts – personal development speakers, coaches, and authors – from around the world, each of whom share deeply personal stories of challenges, success, and overcoming adversity.

Writer and producer Robin Jay wanted to do something more entertaining and compelling than the typical “talking head” documentaries she’d been seeing. She realized that to stand out, a film should be funny and entertaining. It is her belief that any film should be able to engage viewers before it can empower them. “The Keeper of the Keys” accomplishes that by blending unique and powerful expert segments with a very funny fictional story.

Viewers meet the character of Michael Walden, who is having one bad day after another … with no end in sight. He’s lost his job, his home is in foreclosure, and he has grown increasingly negative to the point that his fiancé, Anne, breaks things off with him. Depressed and discouraged, he falls asleep … and dreams. Success coach Jack Canfield appears and tells Michael that he is sending some friends, experts, who will help him to discover the keys and how to use them. Join Michael and his mysterious spiritual guide Elizabeth as they encounter a diverse group of experts eager to enlighten him. Not since “A Christmas Carol” has a dream been this rich, this life-changing, or this much fun!

“The Keeper of the Keys is the most innovative and entertaining film of its kind ever made. Wildly original, howlingly funny, fast-paced, and utterly delightful in every way, the film is truly a gift to the world. True to it’s ad copy, the film takes ‘the Hell out of self-help’ and is the new gold standard in its genre. When you see this movie, you will learn, laugh, and clap your hands with joy!” – Stephen Simon, Co-founder, The Spiritual Cinema Circle; Producer, Somewhere in Time, What Dreams May Come, Producer/Director, Conversations with God, Indigo