The Secrets of the Keys

Writer/Producer Robin Jay is on a mission to help people embrace life, cast aside their fear of death, and find a better way to deal with the challenges life can bring. Her films are helping viewers to transform their lives and discover a path to greater happiness, joy, and fulfillment. Understanding the power of the 7 Keys featured in her films can forever change how you look at life. The 7 KEYS are:

Embracing the principles behind the keys will empower viewers in ways they never thought possible. Author and Motivational Speaker Robin Jay was raised with the powerful influence of Personal Development. When she and her sister Terri were children, their father would have them listen to Earl Nightingale’s “Lead the Field” program as a way of disciplining the girls. He hoped this “punishment” would instill greater wisdom in his children and become a positive influence in their lives, a philosophy that proved to be true. By the time she was a young adult, she had become a huge fan of Dr. Wayne Dyer, Napoleon Hill, Deepak Chopra, and many other thought leaders.

After the success of the blockbuster film The Secret in 2006, Robin saw many similar films being produced. The medium of film was being used to bring countless self-help books to life. Robin bought each one as it was released, hungry to learn more about achieving greater success and getting the most out of life. Unfortunately, she struggled to stay focused while trying to sit through what are now known as “talking head” documentaries. Her friends agreed; they could be challenging to get through. Robin found herself thinking, “Wouldn’t it be wonderful if someone would produce a powerful film that shared important messages, but that was more engaging, more entertaining, that had an actual story line and was fun to watch?” After a few years of trying to get through each new film as it was released, Robin had the thought that perhaps SHE could be the one to raise the bar on the self-help film industry. She thought to create hybrid films, where she could combine an interesting fictional story and fictional characters and have them interact with thought leaders. She would invite these leaders to share their most deeply personal stories in cameo roles throughout her films. In this way, viewers could enjoy a cohesive and entertaining story and become empowered in the process.

The SECRETS of the KEYS

For The Secrets of the Keys, Robin doubled her star power. The film stars success guru Brian Tracy, don Miguel Ruiz, Author of The Four Agreements, Dannion Brinkley, Author of Saved by the Light, Rev. Michael Beckwith, Founder of the Agape Spiritual Center, The Secret’s John Assaraf, singer, songwriter, actress Gloria Loring, and Kathryn Brinkley and Harrah Brown as engaging spiritual guides. These stars appear along with a truly international cast, featuring experts from across the United States as well as Johannesburg, South Africa, Bogota, Colombia, Paris, France, and Montreal, Canada. Robin Jay plays a character in all her films, too, and says even though her character and the story line are fictional, they were inspired by real events that happened in her own life. The Secrets of the Keys has already earned two gold awards from the International Independent Film Awards. 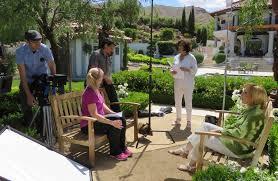 Robin shares, “We shot The Secrets of the Keys entirely on location – here in Las Vegas, in Boulder City, Nevada, at a home called “The House of Angels”, and we shot the scene with John Assaraf in San Diego, California, on the beach at Camino del Mar. The film is as visually beautiful as it is powerful.” The Secrets of the Keys is now in distribution with Beyond Words Publishing, the company that distributed The Secret and What the Bleep? – and took those films to mega-blockbuster status. Robin says, “I am so excited to share this incredible film with the world, and am deeply grateful that Michele Ashtiani Cohn and Richard Cohn at Beyond Words love this film and recognize the power it has.”

BECOMING THE KEYS … AND BEYOND

Robin is currently finalizing production of her third film, Becoming the Keys. This film will once again feature Brian Tracy, Dannion and Kathryn Brinkley, don Miguel Ruiz, and Robin Jay, along with Dr. Joe Vitale, Don and Melinda Boyer and other experts from around the world. It will be releasing January 2019.