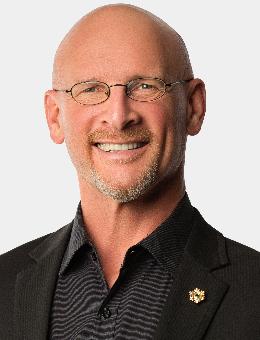 Doug Smith is an elite professional athlete, an expert on the impact of trauma, culture, and change, and is Author of The Trauma Code and Thriving in Transition. He is also the Founder of System438.com, a process for transformation.

At 17, Doug was awarded the Ontario Hockey League's top award for academic achievement. Just two weeks after turning 18, he was drafted 2nd pick overall into the National Hockey League. He would play his first year for the Los Angeles Kings as their youngest player ever and go on to score more than 100 goals in the NHL. Doug set an NHL record his rookie year that still stands today.

In professional hockey game #607 everything changed. At age 29, Doug went full speed, head first into the end boards, shattering the 5th and 6th cervical vertebrae into hundreds of pieces. He woke up later in ICU, a quadriplegic; no arms, no legs, no bladder, no bowels.  Doug’s professional hockey career ended in that instant. He was paralyzed from the chest down. Doug's identity was ripped from his psyche and he was left with his wife and two baby girls at home, and thoughts of suicide.

He wasn’t used to giving up, though. He pushed through an impossibly challenging time, and, with the help of his wife Patti, he has made a full, yet seemingly impossible recovery. Doug’s whole life has been about pushing the boundaries of mental and physical performance and it is these teachings and programs that Doug delivers to his clients.

Today, Doug's books are in Canada's National Parliamentary Library and he is making a dramatic impact around the world. With issues of trauma and recovery no longer a debate, Doug’s work and models are now widely accepted in sports, health care, and corporate leadership, as well as by the military and government. His System 438 identifies the 4 Traumas, the 3 Priorities, and 7 Behaviors essential to recovery and performance.

“The feedback on your presentation we received from the participants was simply outstanding! You delivered a practical model for organizational transformation aimed at creating a high performance work culture and I would highly recommend this presentation to other organizations."- General J.M. Lanthier
Commander Canadian Army, Department of National Defence, Former Major General & Commander, Canadian Army Doctrine & Training Centre